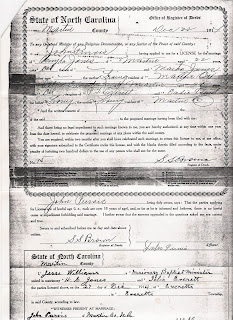 1. My aunt, Martha Edith Jones, was named after both of her grandmothers.

3. On occasion, dad mentions that he thinks granddad had some siblings.

2. On the 1900 census, Hamilton, Martin, North Carolina, there are three families listed for dwelling, 110.

3. I’m fairly confident in stating that (1) this is the Mary E Williams that reared my granddad (granddad’s death certificate list General Williams as his father and Mary Elizabeth Jones as his mother. My grandmother was the informant on granddad’s death certificate), (2) Clansy is my granddad, Claudius, and (3) the Martha listed is my great-grandmother.

3. Who is Leter Jones? Is it possible that my grandfather had a twin? On the 1900 census both are listed as being born in 1892 with granddad being born in July and Leter being born in August.