An Activist in My Family

In my last post, I mentioned that I had met a new cousin. Well through Cousin Cornell, I learned about one of my more noted Everett Cousins, Sarah Everett Small, who was very active in the Civil Rights Movement in Williamston, Martin County, North Carolina. Cousin Sarah was the granddaughter of my Great Grand Uncle Frank Everett.

Cousin Sarah's story interested me so much that I wondered if I could unearth any information beyond that told to me by Cousin Cornell. I came across this YouTube video on the Civil Rights Movement in Williamston. Cousin Sarah is talked about at about the 17:00 mark and is also mentioned later in the video.

As mentioned in the video and also conveyed to me by Cousin Cornell, Sarah and her family would eventually move to and settle in the Boston, MA area. Cousin Sarah would go on to operate a halfway house that now bears her name.

The Power of Blogging Comes Through Again

I know, one of my goals for this year was to start back posting more on both of my blogs. I've had good intentions but so far this year, as I try to get back on top of other things that I let fall by the wayside, my family search has been put on the back burner.

While I still haven't done much research this year, I am proud to announce that for the first time on the paternal side of my family I've actually connected with other living relatives. And I owe it all to this blog.

Cousin Cornell is Great Grand Uncle Frank's grandson. He contacted me via e-mail after coming across Uncle Franks Death Certificate on Conversations with My Ancestors. It took us a few weeks to actually talk to each other as Cornell was traveling and I had a some what hectic schedule.

After we were finally able to talk, I finally begin to wrap my mind around some of the things he had told me via e-mail. The first of those being that one of my grandmother's first cousins was still living. Giving the fact that if my grandmother were still living, she would be 119, I was like how can this be. But cousin Cornell reminded me of something that I had discovered during my own research, that Uncle Frank had two marriages and thus two sets of children, generations apart. Grandma's First Cousin Cleo, Cousin Cornell's aunt, was born approximately 30 years after grandma. 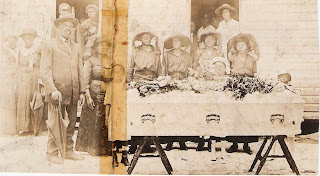 I look forward to talking to my newly discovered cousin more and hope to get a chance to talk to cousin Cleo personally. And if the stars align correctly, I just may get a chance to meet some of these cousins in September.

So, to all of my fellow geneabloggers, keep doing what you do. You just never know when, where or how family is going to pop up as a result of your blogging.