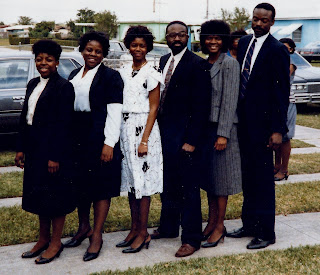 The Jones Grandkids
ca 1987
From the personal Collection of the Owner of this Blog.

It’s hard to believe that until two weeks ago, I had only been to my paternal grandparents’ grave twice. The first time was when my grandmother was interred and the second time was when Aunt Martha was interred.


Unlike the maternal side of my family, when I was growing up, my paternal side never pushed visiting the gravesite of my grandparents and uncle, which now also includes my aunt. Through the years, for as often as we were back in dad’s and the aunt’s and uncle’s hometown, I don’t ever remember anyone saying, let’s go by the gravesite, and while I’ve always wanted to go by the old home site, I don’t ever remember requesting a visit to the cemetery.

Lately though, I’ve felt a need almost a beckoning if you will to go visit the gravesite of my paternal grandparents, aunt, and uncle. So, on Friday, March 16th, having a gorgeous afternoon free, I decided to make the little over an hour drive, from work, to Winston-Salem, NC for a long overdue visit.

I had located the address of the cemetery before I left and plugged it into my trusty GPS unit. While enroute, I called my cousin Valerie, who lives in the Triad area of NC, hoping that she would meet me at the cemetery because even though I had a picture of the tombstone in my mind, I had no clue where in the cemetery the gravesite was located. But Valerie and Cousin Denise, her daughter, both had other plans for the day. After I hung up, I realized that I had forgotten to ask Valerie exactly where in the cemetery our grandparents’ graves were located. As she was in a hurry to get to her destination, I didn’t call back.

Arriving into town, I got off at the exist that usually takes us to dad’s and the aunt’s and uncle’s alma mater, Winston-Salem State, but instead of heading to the left as I’ve done on so many previous trips, I turned right. Before long, I arrived at Walkertown Road, the street the cemetery is located on. I made a right onto Walkertown and was at the cemetery in little or no time. This amazed me as through the years, I had always imagined that Evergreen cemetery, where my grandparents, aunt and uncle are interred, was way out. Why didn’t we ever visit seeing how close it was to the alma mater?

As I turned into the cemetery, I stopped at the front gate and took a picture. If the words gorgeous and beautiful could be used to describe a cemetery, Evergreen, definitely fits the bill. From this point on, it was truly my Ancestors’ guidance that lead me to their graves as I wasn’t seeing any tombstones that matched that picture in my head and of course there were lots of Joneses. I had made almost a complete circle through the cemetery when suddenly I decided to pull over and get out. I parked right beside a Jones family plot that I knew wasn’t it but checked anyway. I then proceeded on to the last row of graves in this section and started walking when suddenly I stopped and looked to my right. Yes, it was their graves. How amazing was that?

I took pictures of the headstone and footstones, and I talked to them, telling them I was sorry that I hadn’t been before now. I promised my grandmother that next time I would bring flowers since I knew how much they had meant to her.

Prior to leaving Winston-Salem, I of course went by the lot one more time where the old ancestral home once stood because no visit is quite complete until I do that.

As I made the journey back home, I would venture by the gravesite of other relatives, those being on my maternal side, and which I will discuss on a future post at Georgia Black Crackers. 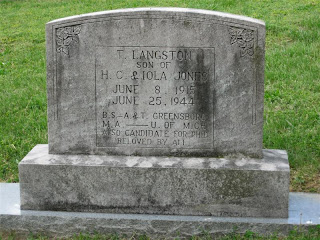 Uncle Thomas Langston Jones
As you can see, my grandparents stressed education and were so proud of the accomplishments of their first born, whom preceded them in death, that they had his degrees awarded engraved on his tombstone. 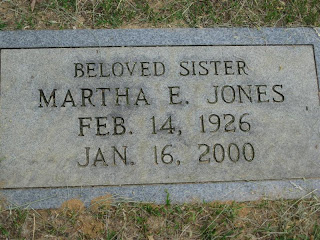 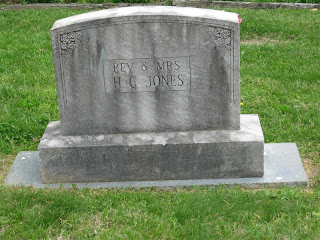 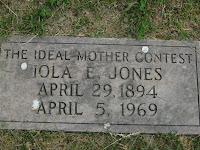 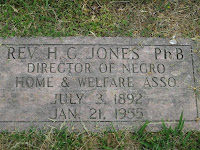 Grandparents
All pictures are from the personal collection of the owner of this blog.

Hargett
My Aunt Martha indicated in a letter to me, dated 2 July 1991, that we had cousins with the surname Hargett and that the then owners of the Hargett funeral home in Greensboro, NC were our distant cousins. Well, this is one of those so-and –so is our cousin type things that I’m beginning to possibly validate.


Based on information that I have to date, my Hargett Ancestry is as follows:

While I’ve been at this awhile, for whatever reason, it wasn’t until this year, that I requested a copy of my great grandparents’, Peter Everett and Edith Ewell, marriage license. On the marriage license granddaddy Peter’s parents are listed as Vica Ann Hargett, living, and what appears to be Henry Cherry (name difficult to make out), deceased.

There is a great deal more work to be done of this line, and sometime in the future I will begin more research on it but from my quick assessment of census records, I believe that


Once again, this shows that you have to continually look back and go through your notes for missed items or from a different perspective. I think the reasons I had never requested my great-grandparents marriage license is that 1) when I initially begin my research, I had wrongly assumed that it was so far back in time that there wouldn’t be a record of my great grandparents marriage or 2) even though I keep somewhat decent records of my correspondence to various places, I might have thought I had already requested and was told there wasn't a record. Either way, I’m glad I realized that I had never asked as the find puts me back one more generation and more or less confirms the information on great granddad’s death certificate.

I’m a little behind on acknowledging the Ancestor Approved Awards that I received for Conversations with My Ancestors. I hope that my presenters didn’t think I didn’t appreciate it. It’s just that it was hard enough to come up with 10 things the first time. In fact I included some of my surprises, thrills, etc. from my paternal side in the 10 things posted on Georgia Black Crackers. So, I’ve been more or less stalling trying to come up with an additional 10 things. 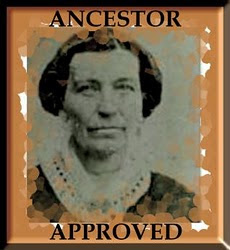 The Ancestor Approved Award for Conversations with my Ancestors was presented to me by Deborah, The Sum of All My Research and Renate, Into the Light.

As a reminder, the rules are the recipient of the Ancestor Approved award lists ten things learned about their ancestors that have surprised, humbled, or enlightened. The recipient then passes the award to ten other bloggers that are doing their Ancestors proud.


Passing it on to Another 10

Miriam, AnceStories: The Stories of my Ancestors

Ruth, Genealogy is Ruthless Without Me

Terri, All Roads Lead to California 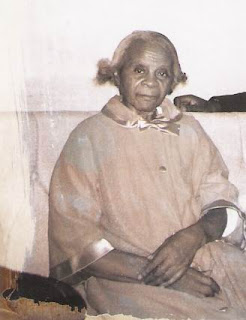