Week 8: Technology. What are some of the technological advances that happened during your childhood? What types of technology to you enjoy using today, and which do you avoid?
This challenge runs from Saturday, February 19, 2011 through Friday, February 25, 2011.
There have been a lot of technological advances during my time here on this earth and I would end up with a book if I talked about each and everyone of them. Of all the technological advances that have occurred, the one that comes readily to mind is the home computer. And surprisingly or not so surprisingly, daddy led the way in his and my home computing adventures. 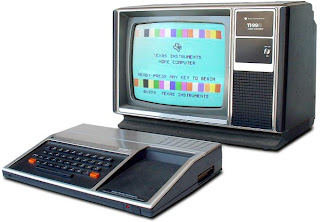 Our first computer was the Texas Instruments TI-99/4A. The TI-99/4A came out in late 1979 and daddy ended up purchasing one prior to 1983. Our first computer was mainly used for playing games. Daddy and I spent many days and hours playing Munch Man, TI’s equivalent to Pac Man, to see who could get the best score. Did I mention the TV was the monitor?
The TI-99 operated off cartridges. Each game or program required a different cartridge. Daddy always wanted more cartridges but because he’s cheap, oops I mean thrifty, he never purchased any additional cartridges. (The TI came with one or two.) So, after graduating college in ’83 and landing my first job, I some how took it upon myself to keep daddy supplied in cartridges. I had come across a catalog that carried all things TI and was always ordering at least 2 new cartridges for all gift giving and just because occasions. Shortly after I discovered the catalog, TI quit making the cartridges. Eons later, I would discover that by the time I had found the catalog, TI had already exited the home computing arena.
I think the next computer was a Commodore VIC 20 or VIC 64. I don’t remember much about that computer.
Right before I moved to in 1990, daddy purchased his first “real” computer. This computer would eventually get handed down to me and become my first “real" computer. By this point in life, I was beginning to use computers for more than just games. However, games were still a big part of the equation. Dad had acquired (notice I didn’t say purchased) a program called Battle Chess. Loved the program but it was a definite memory hog. In addition the 286 processor was as slow as molasses. I used to always joke about how I could practically clean my entire house while the computer was thinking. 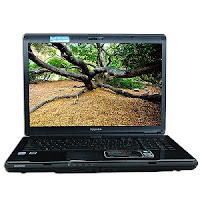 As processors kept improving and getting faster, both daddy and me kept upgrading to our present computers. I eventually also got a laptop to go with the desktop, and just like in the old days with the cartridges, this past Christmas, I got daddy a laptop.
The picture of the TI-99/4A was obtained via Old Computers.net.
*****
52 Weeks of Personal Genealogy is hosted by Geneabloggers and was created by Amy Coffin of The We Tree Genealogy Blog.