Finding Your Ancestors in the NC Archives – Part II

This past , I attended a one day workshop / lecture series about the records in the North Carolina State Archives. The Friends of the Archives sponsored the workshop, which was the first one they had given in over 15 years.

Tar Heels in the Family Tree? A Genealogical Introduction to Records

The second lecture of the day was Tar Heels in the Family Tree? A Genealogical Introduction to Records. The speaker was Helen F. M. Leary, CG (Emeritus), FASG, FNGS.

Helen is a noted family historian, lecturer, and author, and this was the first time I heard her speak. Helen provided a wealth of information on doing research in NC as well as what seemed like little know facts even for those of us who are native North Carolinians and have lived here most of our lives.

Helen began her presentation by discussing the different geographical regions of and how ’s geography affected the type of economy that developed within the state.

Outer Banks
If you know anything about geography, you know we have the outer banks / barrier islands, which inhibited the development of a deep-water port for money crop sales and for immigration. So, it was pointless to grow things that would be difficult to ship.

Coastal Plains
Slow moving rivers that can take produce out to sea define the coastal plains. The biggest farms and plantations were located in this area of the state.

The piedmont area consisted mostly of clay-type soil. As a result, manufacturing arose in this area of the state.

So, due to its geography, ’s economy was based mainly on subsistence farming, land speculation and eventually manufacturing. There were very few large plantations.

Helen pointed out on several occasions that was the daughter to with regard to laws and immigration patterns.

was separated from by a 1663 charter but the borderer wasn’t surveyed until 1728. When it was surveyed, much of was found to be in . Therefore, south VA records should be checked for this time period.

Helen stated that the most valuable records for genealogists are Records of the Counties, which were called precincts prior to 1739, Family Bibles and other private manuscripts, and Land Grants.

Two types of records that Helen talked about and that I found interesting were the Apprenticeship Records and the Bastardy Bonds, Helen pointed out that Apprenticeship Records often provided a clue as to the identification of a father as an illegitimate boy / man often became an apprentice under his biological father. Bastardy Bonds on the other hand are for orphans whose parents were legally married.

Helen also pointed out that Marriage Bonds were filed in the wife’s county of residence and apprentices could not marry. Something I did not realize or know until then.

Other just general research tips that Helen provided are

However, Helen’s best tip was the following:

To listen to more of Helen’s words of wisdom on genealogical research, be sure to check out some of her videos on the NGSGenealogy channel on You Tube. Here is one where Helen reflects on why people do Genealogy.

Finding Your Ancestors in the NC Archives – Part I

After all this time of researching my family, I’ve never been to the NC Archives. For that matter I’ve not even been to the ancestral homelands of Everetts, Williamston, and , which are located in , either.

But that’s all about to change, hopefully, as this past Saturday, I ventured toward our state capital for the first time in a long time to attend a one-day workshop / lecture series on the ’s Archives.

The workshop was a series of 4 lectures and was put on by The Friends of the Archives. We were informed that it has been over 15 years since The Friends have done anything like this due to “competition” from the various genealogical societies and other groups sponsoring these types of events.

The workshop covered the following topics in the order given:

I attended all 4 sessions, although I must admit that I really wasn’t paying attention for the last one, Finding Your North Carolina Revolutionary War Solider or Patriot.

A Virtual Tour of the Archives

The first and definitely the most valuable piece of advice that Debbi gave was be prepared when visiting the NC Archives. Know what you are looking and why you are looking for it so that you can make the most efficient use of your time at the NC Archives. Debbi pointed out that it is easy to get distracted by all the records. Don’t ignore the other records. Make note of them so that if time permits you can come back to them after accomplishing your goals for the visit.

Debbi also took the time to remind the audience that an Archivist job is to provide documents not make decisions about the relevancy of the documents. Understanding this is another reason to be prepared. We, the researchers, are the only ones who can determine if a document is relevant to our search efforts.

We were also provided with a map that showed which NC counties had suffered loss of records due to fires or other mishaps. 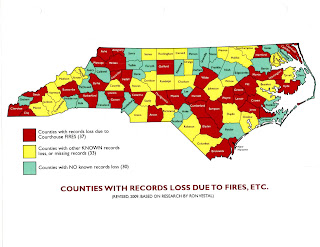 The map is located in the Guide to County Records in the North Carolina State Archives, which I finally broke down and purchased during one of the breaks. The Guide provides a county-by-county listing of the records located in the NC Archives.

Debbi also covered some of the basics of doing research at the NC Archives, which are:

Finally, during the question and answer session, some of the best ways to search on the Manuscript and Archives Reference System (MARS) were addressed. MARS frustrates many folks. The Archives are looking into moving to another system but for now have not come across anything else that can handle everything that MARS does. So, as with most database search systems, the key to working with MARS is to start broad and then narrow it down. How many times have we heard this, regardless of whether we are working with Ancestry’s database, FamilySearch’s database, etc.?

We were also informed that tutorials are available on the website to assist in learning how to use the system.

That concludes the highlights of the first lecture. The remaining lectures will be addressed in future posts.