For those of you that have been following Georgia Black Crackers, you know that I'm participating in the Winter 2010 Geneabloggers Games.

One of my goals for today was to learn a new task. So, I decided to take on Google Maps (Task A in the Expand your Knowlede Category). Until I read Google Maps and Carnival Posts at Bootcamp for Genea-bloggers and more!, I actually thought I new all there was to know about using Google Maps. It turns out that while I did some what already have an idea how to use this tool, I had not realized it's potential of incorprating it into my research and geneablogging. So let's get started.

The big green house with the basement that terrified me is no longer there but this is where my grandparents settled after leaving their home county of Martin in North Carolina. It’s where dad and all my aunts and uncles grew up.


At a time that I can barely remember, there were frequent trips from the hometown to Winston-Salem to check on Grandma Jones. There are only two things I remember about those trips, the noxious fumes that seeped up through the holes in the floor of daddy’s old Ford and root beer floats. Root beer floats were a special treat I always got whenever we went to grandma’s and the trips to grandma’s was the only time that I ever drank them.

Eventually, grandmom’s health and mind begin to fail her and she was moved to my little home town where she stayed with her daughter, Aunt Martha, until her death in 1969, after which she was returned to Winston-Salem to be interred alongside granddad and Uncle Thomas.

Through the years, trips were made back to Winston-Salem for various reasons and activities but rarely ever included a trip by the ‘ole home place.

Eventually the big green monster that terrified me was torn down. I’m not exactly sure when it was torn down (I think it was after grandmom’s death) but I remember it coming down about the same time the “highway” was being build. The highway came right in front of the house. At the time, I remember being mad at whoever had the audacity to forever change the family home and even though no family home has been there in a long while, it still makes me sad.

The trips back to dad’s hometown aren’t that frequent any more, usually dad’s high school class reunion or an occasional football game at his undergrad alma mater. But whenever we go, time permitting, I usually have but one request, can we go by the lot? 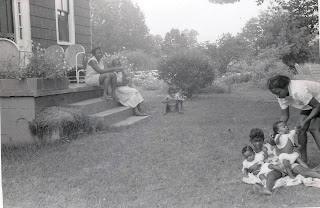 How it looked then (1961)*
Aunt Martha and my grandmother are sitting on the steps. Cousin Lafrieda is holding me and cousin Valerie, who is two months older, and the lady picking up Valerie is her mother, Aunt Emanuline. Notice, I was the good baby!
*From the collection of O. Jones, mother of the owner of this blog.
Until Next Time!
Posted by Mavis at 10:12 PM 3 comments:

I never ever thought of the Ewell surname being unusual until one of my geneabuds, Amy, A_Cain on Twitter, begin asking me about my Ewell line and commented that it was an unusual surname.


Of my paternal lines, my Ewell ancestors are the only line that I’ve been able to trace back to 1870 and yet for some reason it doesn’t fascinate me nearly the way the my other paternal lines do. That is until now. My Ewell line is as follows:

Pennie was born abt 1840 in North Carolina. Her date of death and interment are unknown at this time.

In searching online for information on the Ewell surname, it appears that the best online information can be found at Ewell Family History and Genealogical Society. (I just discovered this terrific site today.) A great many sites suggest that the name finds it’s origins in Wales; however, the researcher, Paul Jensen, states that during his research of the Ewell name and its various phonetic spellings he didn’t find a single Ewell in Wales. Further research showed that the name most likely derived from the Wales name Llewellyn. It appears that for whatever reason, that upon arrival to the US, the name was shortened to its various spellings.

I also decided to check out the Ewell surname on Public Profiler. The top country for the Ewell surname is the United States at 17.78 FPM, with Utah being the top state, and Virginia Beach, VA being the top US city for the surname. In fact, three of the top five cities for the Ewell surname are located in Virginia. Brief readings on the history of Martin County as well as the eastern part of my home state, have always lead me to believe that not only does my maternal grandmother’s Everett side go back into VA at some point but her Ewell side probably does so as well.

On my paternal side of the family, I’m just now beginning to push into the slavery era on any line, so I’ve not done a lot. I’ve only briefly looked at candidates who possibly could be the last slave owner. In the coming weeks, I plan to explore these possible candidates more in depth. I hope you’ll join me on the journey.