Hey folks, still struggling on the blog posting front, but things are progressing. Still working on the office decluttering but I'm almost done with what I'm calling Phase 1. Since I'm writing this post ahead of time, I may have even finished Phase 1 by the time this post to the blog.

The end of Phase 1 means two things, 1) I get to move on to garage decluttering for awhile but more importantly, 2) I  hope to be able to really focus on getting back on the genealogy and getting my genealogy files organized. You know I keep telling myself that if I didn't have to work, I would have the office totally back into organizational shape by now.

In the meantime, although I'm waiting for a reply, I actually did some real genealogical stuff this month. (This is the Mystery part of the Post).

As you know, from time to time when I'm bored, I google various ancestors names, hoping that something pops up. Usually even if something does, it's really nothing that benefits me but this time I'm may have come across something when I googled my grandfather's name, Harry Claudius Jones, for the umpteenth time. 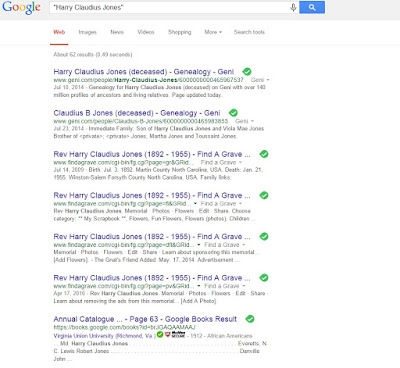 Most everything that came up was either from my blog or information I had entered on Find-a-Grave. But there, at the bottom of the page, was something I hadn't seen before from Google Books. There appeared to be a hit in the Annual Catalogue of Virginia Union University. So, I clicked on the link. I still was not expecting much. This had to be some other Harry Claudius, right? But to my surprise, this Harry Claudius Jones, was from Everetts, NC, my grandmother's hometown and where my grandparents lived during the early years of their marriage.

He was in his second year in 1913. In 1913, my grandfather would have been 21 and about a year away from marrying my grandmother.

Since there seemed to be more than one catalogue contained in this listing, I searched subsequent years and found other listings for Harry Claudius Jones from Everetts, NC. My gut tells me this has to be my grandfather. After all how many Harry Claudius Joneses can there me from the same little small town in North Carolina. But the gut needs supporting documentation, so after consulting with my genea-friend, Renate, from Into the Light, I decided to write to the Virginia Union Alumni Association to see if they could help me.

I'm hoping that if there are some records that they will perhaps shed some light on my granddad's biological family, specifically my great grandmother Martha,  but more than anything, if this is my granddad, I'm just thrilled to learn about this part of his life. While his tombstone indicates that he received a Bachelors in Philosophy, I never heard dad or any of the aunts and uncles mention anything about granddaddy going to college. And my first cousins (all older than me) hadn't heard anything either.

By the way, since my genea-friend Renate lives in VA and often passes through Richmond in her travels, she has offered to stop by Virginia Union and do look ups if need be. If I don't hear anything soon, I may have to take her up on that offer or better yet, go myself during the Afro American Historical and Genealogical Society (AAHGS) conference, which will be held in Richmond this year. For now, though, I will try to be patient and continue to work on the organizing, and other life happenings.