The Time Capsule
It's Saturday night and you know what that means, it's time for the next assignment from Randy Seavers, Genea-Musings.
Tonight's assignment:
I chose September 14, 1887, my paternal great grandparents (Peter T. Everett and Edith Ewell) marriage date.
The top News Headlines for this week were:
The President of the United States was Grover Cleveland. There was no Vice President, (Thomas Hendricks died November 25, 1885.)
People Born on that this date include:
Hot new toys were Parcheesi, Snakes and Ladders, and Cap Guns.

Some of the hits were:

Carnival of African-American Genealogy, 3rd edition - They Served With Honor

The Jones Men Who Served
WWII and Korean Conflict
I originally thought I had nothing to contribute to the 3rd edition of the Carnival of African American Genealogy (CoAAG), They Served with Honor - In Memoriam, African Americans in the Military 1914 - 1953 . Even though I knew dad and two of my uncles had served in the military, I really didn’t know a lot about their service. There is still a lot of knowledge to be gained about their service but as a result of this carnival, I've been able to start working on one of my genealogical goals for the year, which was to sit down and interview / record my parents. Turns out, even though I waited until the last possible second to work on this carnival, I’ve enjoyed doing it and am proud of the contributions my ancestors / relatives gave in service to their country no matter how big or small. 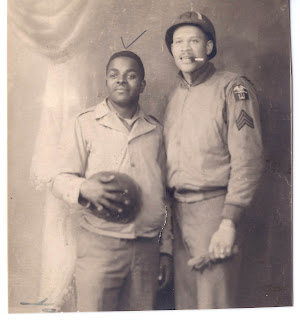 The picture shows Uncle Claudius, on the left, with one of his army buddies.

Uncle Toussaint’s tombstone lists him as a Tec 5 (Technician 5th Grade) during WWII. A brief online research shows that those who held this rank were addressed as corporal. From what I understand, the Technician designation was basically a pay grade designation. In today’s army, I think those with this designation would be called specialist. They were possibly non-combat positions. Specifically, technicians, as the name implies, tended to have a technical skill. Perhaps, one of these days, I will try to get a copy of Uncle Toussaint’s military records so that I can learn more about this part of his life. 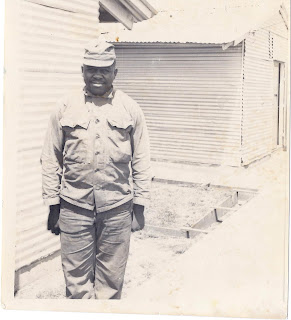 Finally, there is Daddy. Daddy served in the Army during the Korean conflict. He was part of the Signal Corps, servicing and repairing RADAR and Radio equipment. Daddy tells me that he was drafted for service. As he put it, “I certainly didn’t volunteer to go.” When quizzed about how they decided what he would do, he says that he was given a test to determine where he would fit in. After that determination was made, he was sent off to RADAR school and Radio Repair School for training.

Daddy received his training at Fort Gordon in Augusta Georgia and Fort Monmouth in New Jersey. After his training was completed, daddy flew to California then embarked on his voyage to Japan where he was stationed. Knowing nothing about military life, I didn’t understand why he was stationed in Japan if he was part of the Korean conflict. Daddy explained that the broken equipment was sent from Korea to Japan, where it was repaired then returned to Korea.

Daddy went in as Private. There were no promotions although he did make Soldier of the Week. According to him, his Rank was frozen unless he went through the OCS program (Officer Training School). Daddy says he passed the test to be accepted into the program but decided not to go because he had no desire for a career in the Army. So, he came back home to North Carolina and began his teaching career.

As you can see, none of them were in combat. Being college educated men appears to have afforded daddy and my uncles a luxury that few men, white or black, had at that time. For me, this doesn’t minimize their service to their country for their roles were still important.


The pictures of dad and Uncle Claudius are part of the collection of the owner of this blog. The picture of Uncle Toussaint's tombstone was obtained via FindAGrave.