I think I’ve determined why there was no clustering of African-American Ewell families around a former Ewell slave owner on the 1870 and 1880 censuses. He was dead and his son, who also owned slaves, had moved on.

Last week, I looked at the 1860 slave schedules but forgot to check the 1850 slave schedule as well as the regular censuses for 1850 and 1860. So, going back and examining these documents, here is what I discovered.

2. The enumeration for Jesse M. Ewell on the 1860 census is as follows:


3. The 1850 census shows a Joshua Euell, age 19, in the household of Jesse Euell. This points toward J. L. Ewell being Joshua Ewell.

Remember that wonderful website, Ewell Family Genealogy and Historical Society, I came across about a moth ago. I decided now was as good a time as any to poke around on it some more and low and behold, I found some of the history of Jesse Ewell’s family, which dates back into the 1700s in my North Carolina research area. You know, that was just too easy.

So here is a brief synopsis of this family. Jesse Ewell was born in neighboring Pitt County in 1798. His father was James Ewell, b 1750 in Pitt County. Jesse had five children, Randall, Jesse James, Joshua Lawrence, Parthenia Olivia and Lillitha.

Randall Ewell was alive in 1855 but has not been able to be traced beyond that. To date, no further information is available on Randall.

Jesse M. Ewell died in 1869. Although his death occurred after emancipation, I still plan to check any available probate records. Maybe he had his will drawn prior to the end of slavery and never changed it. I can hope can’t I?

Joshua Lawrence Ewell died in 1905. It appears that perhaps after the Civil War, Joshua never returned to the life of a farmer. In 1880, he was Clerk of Court and at the time of his death, he was the Justice of the Peace in Williamston, NC and this appears to be what he is best known for. Surely there is more?

My gut tells me that I’ve found my slave owning family but I tread lightly as things may not appear as they seem to be. So, where do I go from here?

• Deeds? – So wishing that the Register of Deeds was open on the weekend as I would just hop in my car and drive to the eastern part of my home state. 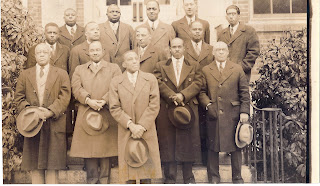 This is a picture of my granddad, Rev. Harry Claudius Jones, and the rest of the men who made of up the Black Forsyth County Chamber of Commerce. I actually think this organization may still be in existince, but with so many genealogical irons in the fire, it's one thing I've not taken the time to do further research on. Perhaps in the next few months. Granddad is on the back row, second from the left.
The picture used in today's post was inherited from the aunt of the owner of this blog.

There is nothing conventional about African-American Genealogy. I should follow the rules THEY hand out, but both my ancestors and I say screw it. So it’s that attitude that says, yes, I will follow both my Ewell ancestors and my Pierce Ancestor,  Georgia Black Crackers at the same time into slavery.

They don’t realize that my Georgia Ancestors and my North Carolina Ancestors seem to feed off of each other. By researching in two different states, I get ideas from one to facilitate the research of the other and vice versa.

Slam Dunk – I don’t think so

As I’ve matured in my genealogical research, I’ve learned that there is often no rhyme or reason in trying to determine the last slave owner. I learned early on, through reading Black Southerners 1619 – 1869 by John B. Boles that what history had always taught us, that former slaves always took the last owners name, simply was not true. Sometimes, a family’s surname is a clue, especially if former slaves were within a given family throughout slavery, but often times the surname is not a clue at all. Could this possibly be the case with my Ewell ancestors?

In 1870, in Martin County, NC, there were all of 27 people with the surname Ewell. My family accounts for 18.5% of those Ewells. The majority of the Ewells are Black. However, there is no cluster of Black Ewells around a White Ewell. In fact, the Black Ewells are not even clustered around each other. And interestingly enough, it rather seems to be that way with the Black families of Martin County regardless of surname.

Although there is no clustering, the possibility still exists that my Ewell family might have been owned by a Ewell, so I will still check the 1860 slave schedule for slave owners with the last name Ewell.

More so than with my maternal Pierce ancestors, I canvassed the neighborhood looking for someone with enough wealth that may point toward them being a former slave owner. By doing this, I’ve come up with 13 candidates. These candidates will be evaluated in future posts.

I first check the 1860 census to determine if there were any free persons of color with the Ewell Surname. In 1860, there are very few White Ewells in Martin County or North Carolina for that matter and no Black Ewells are enumerated.

The 1860 slave schedule for Martin County, North Carolina, indicates there were two slave owners with the surname Ewell. 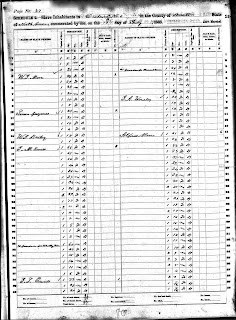 Comparing their slaves against Grandpa Isaac and Grandma Penny’s 1870 enumeration and assuming that both of my 2nd great grandparents were owned by the same person, neither listing provides a good match. J. M. Ewell’s slave holdings show a female that could possibly be Grandma Penny but no male that might be Grandpa Isaac. J. L.’s Ewell’s holdings are just the opposite.

I do wonder if these two Ewell owners might be related. Could it be possible that one owned Grandpa Isaac and the other owned Grandma Penny? Should I do further exploration with these two Ewells, first, or should I finish my evaluation of the other candidates?