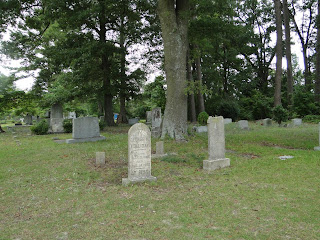 Everetts Cemetery
Everetts North Carolina
In this cemetery, in an unmarked grave, lies my 2nd cousin once removed (my daddy's first cousin), James Henry "Buddy" Johnson, Jr. (1911 - 1971). Cousin Buddy is my Grand Aunt Goldie Everett Johnson Hyman's son. Cousin Buddy never married and was a farmer.
I imagine that I probably met cousin Buddy when he came to my grandmother's funeral but I don't remember anything about him. I was 8 at the time and don't remember a lot about my grandmother's funeral other than it was a whirlwind of events. I remember there being two funerals, one in my hometown where grandmom spent her later years, and one in Winston-Salem, NC, where grandmom resided most of her adult life. I only know Cousin Buddy attended one of the two, maybe both, because my mother, who has a better rememberance of events on daddy's family than daddy does, remembers him being there.
Picture of Everetts Cemetery obtained via FindaGrave.

A few months ago, April to be precise, 23andme, ran a one-day sale in honor of DNA Day. It was one of those things that while it wasn’t in the budget or planned for, the sale price was so phenomenal that I couldn’t afford to not subject my parents to one more ancestral DNA test. 23andme’s $499.00 package which includes ancestral and medical testing was offered for, are you ready for this, $99.00. See what I mean about couldn’t afford to pass it up. Who knew when there would be another opportunity like this?


The main reason I was interested in autosomal testing is due to the stories of Native American ancestry on my maternal grandmother’s line. I figured this would be a way to prove once and for all whether there was any truth to the story. I’ll talk about my mother’s results on Georgia Black Crackers.

Unlike the previous DNA testing I had my parent’s do for yDNA and mtDNA testing, the sampling process for 23andme was different in that you spit into a tube instead of swabbing your cheeks. Daddy, of course did some more complaining. “I thought you had already tested my DNA.” “I can’t spit in that little thing.” and the last one was really funny considering he’s always spitting, “I can’t fill it up to that line.” With much cajoling, I finally got him to collect enough spittle, my opinion only as it was not to the mark, so that we could ship it off.

Due to the high volume of people that managed to catch the one-day sale, it took awhile after shipment back to 23andme for them to acknowledge receipt of the kit. Once receipt has been acknowledged, I always feel like a kid on Christmas Eve, constantly checking to see if results are in.

The month of May came and went and no results. In June, I went on vacation and when I returned part of the trove of genealogical surprises was that the autosomal DNA results were in. Even though I don’t have nearly the stories, etc. on my paternal lineage as I do on my maternal lineage, I had / have formed some hypotheses over the years. One is, there was very little miscegenation going on my father’s side of the family. Granted that hypothesis was developed based purely on the old pictures, etc. that I had seem of my ancestors. Well, daddy’s results tend to support that hypothesis. Dad’s results were 85% African, 8% European, and 7% Asian. Wow dad’s even higher than Emmitt Smith’s 81% African, shown on a recent episode of the American version of WDYTYA. When I told dad the results he just chuckled.

23andme also offers Relative Finder, which is another reason I was interested in the autosomal testing, as I keep hoping to come in contact with another descendant on one of my paternal lines who can perhaps help with filling in some of the details behind the dates and places. I’ve still not had any success in that area of my research. Relative Finder did provide me with possible 4th – 5th cousins but of the people that I’ve had contact with, there aren’t any familial matches that I can confirm / trace. Hopefully, in the future, there will actually be a match.

Goals for the Month of August (Paternal Ancestors) - Week 2

Nope, you didn't miss Week 1 because there was no Week 1 post. As I'm already into the last third of the year (Where did those first seven months go?), I've decided to revamp my strategies somewhat for hopefully achieving some of my goals for this year. I've seen some of my fellow geneabloggers state their monthly and / or weekly goals on their blogs. I'm not a crowd follower but when I come across a possible great idea, I do run with it.

Earlier in the year, I had been doing monthly and weekly goals, but did not post them to my blogs. Hopefully by stating them here, I will get most accomplished.

There are three full weeks left in the month so I'm hoping to start small  and have a head a steam build up by the end of the month to get back into the research and blogging, at least until the next busy season, which should occur some time around Thanksgiving.

So, goals for this week for research, etc. on the paternal side of my family are