Tombstone Tuesday - One Thing Leads to Another

In an effort to catch up on some of my goals for the month of September, I once again found myself going back and forth between Ancestry and FindAGrave in hopes of finding  a tombstone of one of my paternal Ancestors or Relatives to post for Tombstone Tuesday. (Yes, I was working toward achieving my blogging goals for the month.)

Instead, what I found was tons better, a Great Grand Uncle's, Frank Everett, death certificate, Great Granddad Peter Everett's brother. While I had clues all around pointing to his existence, I hadn't put it all together before this morning. Of course, as usually is the case, I wasn't even looking for this this AM when I came across it. In fact, I wasn't even searching for Everetts this morning. I was looking for Hargetts, great granddad's mother, hoping that she had lived long enough to have a death certificate to record her death.

I don't know why I never came across my Great Grand Uncle's death certificate before now. I feel like I've searched the Everett surname plenty of times since discovering great great grandma Vica Ann. Either I never made the connection because I was so focused on other information or it simple didn't surface based on the search criteria I was using at the time. But I think the real reason is I came across this today is simply they, the Ancestors, finally figured it was time to reveal this to me. Today, when I did a search for death certificates, Uncle Frank's death certificate was the first to come up and silly me was still thinking why did that come up I was searching for Hargett. Thankfully, I didn't dismiss it. 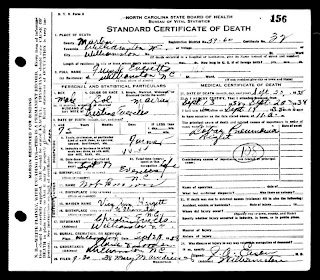 Finding Uncle Frank's death certificate led me to some other interesting finds including possible confirmation of a family from the 1870 census that I wrote down almost 20 years ago as possibly my family.
I hope to write about the rest of this early morning saga in the very near future but need to do a tad more legwork, but as of this moment, let me just say that I have possibly peeled back another layer of my Everett line as a result.
So, thank you Uncle Frank and the rest of my ancesters. I couldn't have done it without you.

I could be wrong but the paternal side of my family is the only one that I know of that actually sung grace. And during any family singing, of course the two voices that always could be heard above all others was my dad's and Aunt Martha's.

If you are wondering what we sang, here it is:


God is great and God is good,
And we thank him for our food;
By his hand we must be fed,
Give us Lord, our daily bread﻿
Amen
So, how did your family say grace?﻿

Genealogical Goals for the Remainder of September - Paternal Lineage

September Goals
Hopefully, this month or shall I say what's left of the month, I will do a better job on the goals for the paternal side of the family.
Research
The first goal is one I'm bringing forward from last month. Actually it's been on the to do list for several months. Praying that I finally get it accomplished this month.
Blogging / Writing
Miscellaneous
Listed on September 2010 Genealogical Goals - Maternal Lineage at Georgia Black Crackers.

I'm feeling like I didn't get as much accomplished on the research on the paternal side as I had planned for. So, let's see.

2.
Unfortunately, I've still not managed to get a call to my geneabuds friend. When, I have time, I seem to never think about calling and when I don't have time, I do.


I did manage to get this accomplished.

No, I didn't manage to get any of this items accomplished. Hopefully, I'll get more accomplished this month.